As first art director and managing editor of Breakthrough Magazine, Ken Edwards was responsible for the photography and design of most of the magazine’s covers, going back to 1984. As the current associate art director of the publication, each magazine’s cover is carefully conceived, designed and executed to be a beautiful showcase for the artistic taxidermy of each issue’s featured artist. Ken spends up to eight hours on each cover, pouring over individual pixels to create a work of art worthy of the taxidermy champions on display. Here are some of his favorite covers. 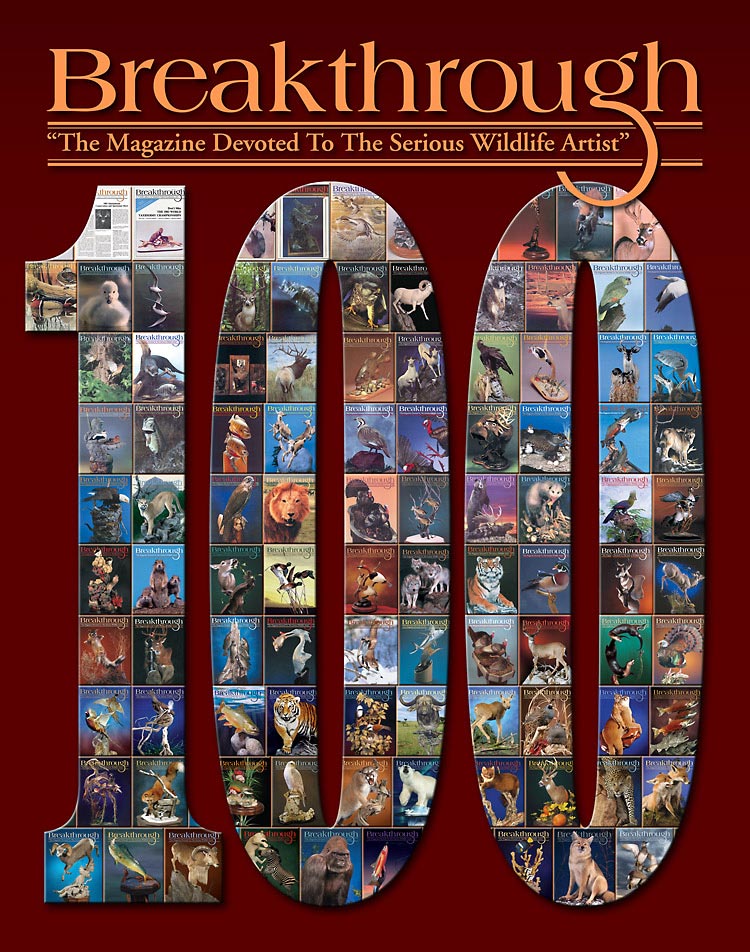 For Breakthrough’s 100th issue, a special cover was planned. Ken came up with the idea for this cover a full three years before the issue came out, before the covers on the bottom row even existed. Each of the rows represent ten issues in chronological order, except for the first row which has issue 1 through 9. So the second row contains the covers from issue 10 to 19. The third row has the covers from 20 to 29, and so on. Every issue from 1982 to 2010 is represented. The bottom row shows issue 90 through 99. Of these 100 covers, Ken Edwards designed and/or photographed 67 of them.

The photo for this polar bear on an ice base by Dale Manning and John Ottman was shot with studio lighting in front of a blue background. The ocean surface, moon reflection, clouds, stars and aurora borealis were composited into the photo to provide a chilly atmosphere to this beautiful mount.

To highlight Jeff Mourning’s gold medal-winning trout, Ken Edwards added three elements photographed from his own front yard. The sunset, new moon and stars were added to complement the colors and design of Jeff beautiful composition.

Not particularly noteworthy as a Photoshop exercise, but important historically, as this was the first Breakthrough cover that Ken Edwards ever used Photoshop to produce. The artist was Phil Soucy, the issue was number 42, and the year was 1995. The version of Photoshop was 3.0 and it was installed from a huge pile of floppy discs.

For Kent and Valerie Reedy’s 2013 Akeley Award-winning wood duck mount with a carved decoy representing the reflection in a pond, this photo by Glen Browning was carefully cropped, and the background slightly vignetted and rendered to offer just a hint of the horizonal water surface line. The Photoshopped image underwent extensive tonal adjustments to reveal highlights and shadow detail in the carving and wooden habitat.

South African taxidermist Travis de Villers provided several shots of this custom lion mount, but none of the photos were magazine cover quality. Ken Edwards carefully stiched together a higher-resolution close-up of the head of the lion with a lower-resolution shot of the body made from a slightly different angle. After eliminating the visible transition areas, a complementary background was rendered and the masthead color chosen. The individual hairs of the lion’s mane were carefully re-drawn with a digital tablet to cover the letters of the masthead realistically.